The Oconee River at Dublin shirt design features a vintage view of Blackshear's Ferry. Pictured in the lower left hand corner of the image is Roswell Adolphus Watson, the Ferry Master. Below, is an article by Scott Thompson of the Laurens County Historical Society about 'Uncle Rawls' and his love of the river.

Whether it was in a church or while piloting his ferry boat across the Oconee River, Rawls Watson loved to sing. This giant of a man was a fixture in singing conventions and church services throughout the county. In the history of Laurens County, no man ever kept the ferry longer. No one ever came close. No one ever knew more about the river, its currents, eddies, twist and turns. To his many friends and acquaintances he was simply known as “Uncle Rawls.” For more than three decades Rawls Watson, just kept on rolling across the river singing the praises of God with the safety of his passengers in his hands.

Roswell Adolphus Watson was born on March 20, 1875. A son of Seaborn Riley Watson and Mary Catherine Raffield, Rawls topped the scales at eleven pounds at birth. His grandmother Cynthia Watson commented, “He is the longest baby I have ever seen.” She predicted that if lives to adulthood, he will become a giant in the land. Grandma Watson was right.

Rawls grew up in the Buckeye and Burgamy districts of Laurens County. He attended Marvin Methodist Church, which was located on the Buckeye Road. 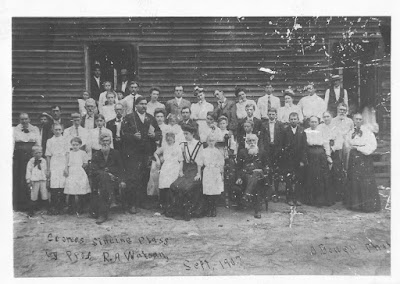 As a young boy, Rawls became interested in singing. His uncle Joseph Watson taught singing at Marvin Church. Two of Rawls’ older brothers, Thomas and Robert, joined the class. Their father dutifully paid the one dollar fee to attend. Rawls asked his father to let him go. His request was denied. Rawls again pleaded with his father to let him go. His father refused stating “He did not have money to throw away on you for a ten-day frolic.” Rawls, as boys will do, ran to his mother. There was nothing to keep him from going. His chores were done. Mrs. Watson took up the cause. She asked Mr. Watson why Thomas and Robert could go and not Rawls. The old man reiterated his staunch position believing that Rawls wasn’t going to sing but to have fun. Mrs. Watson, undaunted by her husband’s stubborn decision, vowed to sell chickens to raise the money. Then in an effort to keep peace in the family, Joseph Watson offered to let Rawls attend the class for free. Later in life Rawls wrote, “I attended the school and made good.”

Rawls didn’t end his musical education there. He studied music until he mastered vocal music. At the age of twenty-one, Rawls moved to Bulloch County to study music to further his career. It was in Bulloch County where Rawls quickly met the his wife, Miss Mollie “Lanie” Lane Turner. They married in 1897 and had eight children together.

Rawls Watson learned to teach music to others. Over his lifetime, Rawls himself conducted more than 116 singing schools. He estimated than he had taught or tried to teach at least three to four thousand pupils to sing. Rawls took solace in the fact that before his father’s death, he rejoiced over his son’s success in his musical career.

Rawls and Mollie Watson established a farm on her father’s land in Bulloch County. Life on the farm was good until the family succumbed to the financial panic following World War I, the devastation of the boll weevil, and Mollie’s illness. After Mollie’s death, Rawls sold the farm, paid his debts, and removed himself and the family back to Laurens County. Rawls, with eight children of his own, married the widow of Charles Underwood, who bore him his youngest child. 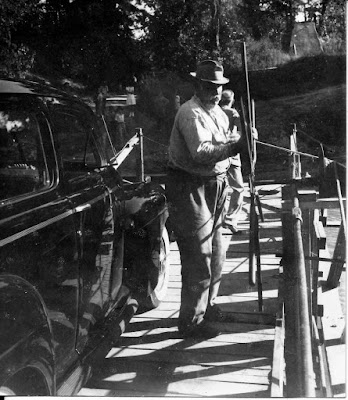 In those days, people living in the northern section of the county used the ferry at Blackshear’s Ferry to cross the river. The right to keep and operate the ferry was put up to the highest bidder. Beginning in the early 1880s, members of the Watson family were often the low bidders. David Watson kept the ferry during most of the 1880s until 1892, when Joseph T. Watson took over the operation until 1895. He resumed his position as ferry keeper in 1901 for a year and again in 1904 for at least five more years.

So it was only natural that Rawls Watson would have a desire to become the ferry keeper at Blackshear’s. In 1911, Rawls Watson, who had previous ferry experience, was appointed ferry keeper by the county commissioners. It was also natural that he would sing as his ferry boat plied across the waters of the Oconee. His booming voice could be heard long before passengers made it to the banks of the river singing the songs of the Gospel.

He was right proud of his self-composed, “The Boatman’s Song.” Among its lyrics are: “ Lo my name is written in the Lamb’s Book of Life, Oh, ‘tis written in the book of free grace, I shall dwell forever there, free from sorrow, pain and care, with my Savior in that happy bright place. Oh, the glory I shall wear, Oh the rapture I shall share, when those fields of fadeless beauty I shall tread. There the river of all grace will reveal His smiling face, with all Heaven’s radiant glories ‘round me spread.” 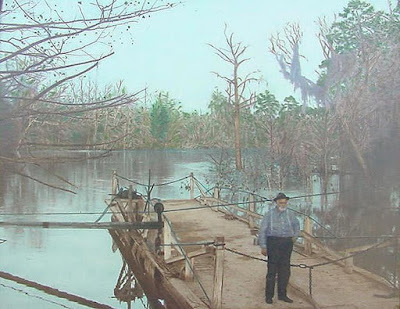 Watson remembered the great flood of 1925 as the greatest flood of his lifetime with the 1936 flood coming in a close second. There were a few times when floes of ice would slam into his ferry boat. He told Eugene Anderson of the Macon Telegraph that his large size and strength came in handy in fighting the magnitude of swift water and chunks of ice striking his boat.

Rawls knew and appreciated the rich history of the land around the ferry. He often talked of the legend that the Indians told of the days when a white tribe came through the area and crossed the shoals on their westward journey. For centuries, men have speculated that this tribe may have been the survivors of the lost colony of Roanoke. Watson told of the place known as Carr’s Shoals a few hundred yards down river where DeSoto’s soldiers crossed more than four centuries before. Rawls Watson knew of his predecessors, the Trambles and the Bateys, the first keepers of the ferry. He knew where they lived. Rawls often related the stories of Temperance Batey Hall and of Chief Kitchee, whose village stood on the high bluff above the shoals. He knew of the place of the graves of three Indian braves who were allowed to remain to guard the burial grounds of their people. Unfortunately the details of these stories are gone forever. 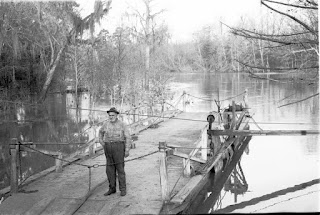 There is an old story, sworn to be true, that Uncle Rawls would wager that he could stand on the steps of the courthouse and read the inscription on the base of the Confederate monument, some three blocks to the southwest away. Of course, Rawls, pretending to strain his eyes, read verbatim the words he had already committed to his rich memory.

With the coming of the automobile and better and new bridges across the Oconee River, the need for passage at Blackshear’s Ferry was limited to those residents of northern Laurens County. Beginning in the early 1930s and beyond the end of World War II, the ferry was closed several times due to lack of funding by the county or severe damage to the ferry boat.

Uncle Rawls was a public servant beyond his duties as the ferry keeper for nearly 35 years. Watson served as the Laurens County Coroner in 1944. Previously, he had served as a peace officer, deputy sheriff, marshal and chief of police. 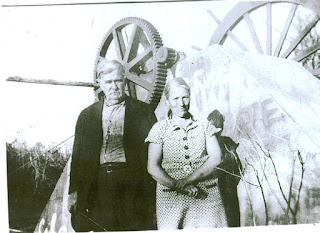 At the ripe old age of 81 on September 28, 1956, Rawls Watson for the last time crossed the river and laid down to rest in the shade of the trees next to his precious Mollie in the Lower Lotts Creek Baptist Church Cemetery, south of Statesboro, off present day Highway 301.